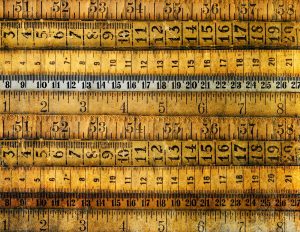 Jeremy Knox’s blog post entitled Abstracting Learning Analytics on codeactsineducation argues that what is important about LA is not simply whether it offers a faithful representation of ‘learning’ or the propitious conditions for it, but that it provides a view of what matters to the analyst and the norms and the values of the world she inhabits to create her depiction. As Knox contends that an abstract painting is ‘an account of the internal act of producing the painting’ so, too, he argues, learning analytics is concerned with the ‘immanent practices’ of producing analytics and all that is encoded in them.

Knox’s abstraction brings to mind situations and representations in which what counts is not always ‘mattered’ in front of our eyes in crisp authoritative images, more or less faithful to what it represents, but what is obscured, neglected or struggles for definition from behind other layers of meaning. Code acts in education often to promote ‘wider political, economic and societal’ influences, leaving its heart to be suggested by its absence like dark matter, the objects of symbolist poetry or the reverso of the negative image. The intangible and difficult-to-locate qualities of education and learning make them hard to reveal and to measure, leaving things open for other forces to substitute their own methods and metrics. Knox’s article calls for these to become less opaque so that we can properly compute their relevance and application for education.

However while the idea of exclusion suggest the absence of any presence of that which is excluded, in fact that which is instituted depends for its existence on what has been excluded. The two exist in a relationship of hierarchy in which one will always be dominant over the other. The dominant concept is the one that manages to legitimate itself as the reflection of the natural order thereby squeezing out competing interpretations that remain trapped as the excluded trace within the dominant meaning.