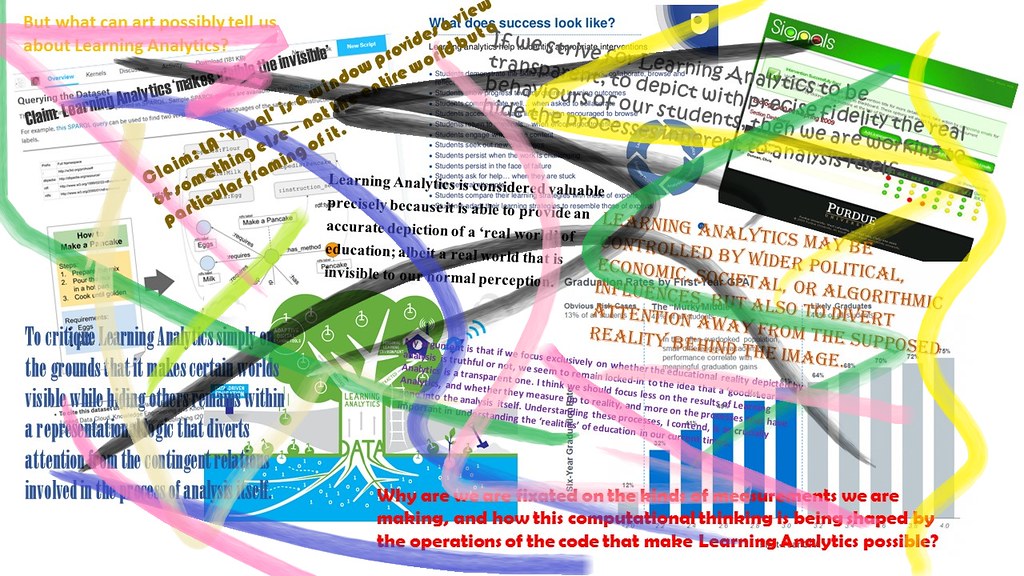 https://codeactsineducation.wordpress.com/2014/09/26/abstracting-learning-analytics/
The images and text were not selected at random. This did involve a lot of the same processes as making my normal study notes. It also illustrates my digital literacy as I make use of several digital tools to remix Knox’s materials.
One images is of Signals and another the illustration of “the murky middle”, both of which were referred to in the article. One was from my alma mata which had the pertinent question “what does success look like?” when applied to learning analytics, which is also the kind of question Knox would want to us to ask. There is a kind of benign cartoon illustration which is how I believe LA advocates envisage their use in Education. Finally, there is also a screenshot from this project, which I found via twitter this week. It illustrates the complexities of algorithmic practice once their inner workings are made visible.
I also went through the text and picked out what I believed to be the key quotes that outlined the thrust of Knox’s Position:

But what can art possibly tell us about Learning Analytics?

Claim: LA ‘visual’ is a window provides a view of something else – not the entire world but a particular framing of it.

Learning Analytics is considered valuable precisely because it is able to provide an accurate depiction of a ‘real world’ of education; albeit a real world that is invisible to our normal perception.

To critique Learning Analytics simply on the grounds that it makes certain worlds visible while hiding others remains within a representational logic that diverts attention from the contingent relations involved in the process of analysis itself.

If we strive for Learning Analytics to be transparent, to depict with precise fidelity the real behaviours of our students, then we are working to hide the processes inherent to analysis itself.

Learning Analytics may be controlled by wider political, economic, societal, or algorithmic influences, but also to divert attention away from the supposed reality behind the image.

My argument is that if we focus exclusively on whether the educational reality depicted by analysis is truthful or not, we seem to remain locked-in to the idea that a ‘good’ Learning Analytics is a transparent one. I think we should focus less on the results of Learning Analytics, and whether they measure up to reality, and more on the processes that have gone into the analysis itself. Understanding these processes, I contend, is as crucially important in understanding the ‘realities’ of education in our current times.

Why are we are fixated on the kinds of measurements we are making, and how this computational thinking is being shaped by the operations of the code that make Learning Analytics possible?